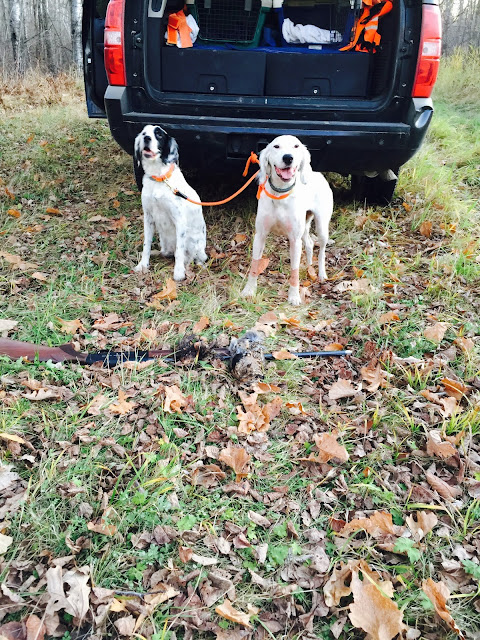 The Wisconsin DNR is in its third and final year of study looking at the impact of West Nile Virus on ruffed grouse.

The DNR is looking into how present the virus is in the species and the effect it could have on populations.

So far, results show the virus does not have a devastating impact on the ruffed grouse population in Wisconsin.

“About 20 to 30 percent of the grouse that we’ve sampled have antibodies to West Nile Virus which means that they’re contracted the disease but they’re building up antibodies and flushing it out of their system and actually surviving the disease,” said DNR Assistant Upland Wildlife Ecologist Alaina Gerrits.

The COVID-19 pandemic is complicating the final year of the study.

Normally DNR staff would get together and assemble sample kits to hand out to hunters. They can’t do that this year because of COVID-19. But Gerrits estimates there are about 500 unused kits out there from previous years.

“We’re just asking hunters that if you have left over kits or if you know someone who does to please send it in. Nothing in the kit expires. We felt that this was our best option instead of delaying the study or canceling it was just to try get as many samples as we could this way,” said Gerrits.

Hunters are asked to collect a small amount of blood, a few feathers, and the heart from their harvested grouse.

It will likely be next winter or spring before the final results of the study are available.

You can learn more about ruffed grouse and the DNR's study on its website.

This week on Outdoor Bound TV, we get ready to hit the woods at famous Bowen Lodge in Northern Minnesota for a little October grouse and woodcock hunting with a group of friends, who gather each year, from all over the U.S., to take part in this special weekend. Come on along, as it's all about good friends, good food and great hunting. 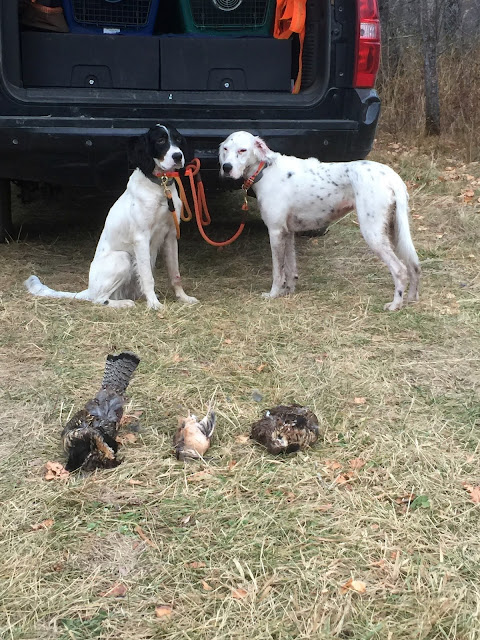 Trying to predict ruffed grouse hunting prospects is never an exact science, given the thick wooded cover in which the birds are found, but all of the signs this year point to an average season in Minnesota – or perhaps slightly better than average.

Based on spring drumming count surveys, which were abbreviated this year because of the Covid-19 pandemic, surveyors from the Minnesota Department of Natural Resources and other cooperators tallied a statewide average of 1.6 drums per stop along their listening routes.

That’s on par with or better than the past five years with the exception of 2017, when the spring survey count was 2.1 drums per stop statewide, a number that didn’t translate into better hunting success that fall and left many DNR experts shaking their heads.

Biologists tally spring ruffed grouse abundance by following set routes and stopping to listen for the “drumming” sound male ruffs make as the birds rapidly beat their wings in an effort to attract a mate.

The Southeast survey region wasn’t sampled this year. The DNR didn’t conduct a sharptail survey this past spring because of the pandemic.

Read the full article for more reports and updates

Email ThisBlogThis!Share to TwitterShare to FacebookShare to Pinterest
Labels: 2020, MN

How To Miss A Ruffed Grouse - Video

This is from a couple of years ago.  We were hunting north of Deer River MN

Minnesota’s ruffed grouse spring population counts are similar to last year and likely are following the 10-year cycle of rise and fall—a predictable pattern recorded for 71 years. Due to COVID-related restrictions, this past spring’s drumming counts in southeastern Minnesota were not conducted as planned.

As the DNR was able to resume more field operations in May, there was still time to conduct drumming counts in more northerly portions of the state, where grouse breeding occurs later.

While spring drumming counts that were conducted produced similar results as last year, only having counts from the northern region—which has more forest and holds more grouse—likely means the statewide index is higher than it would be if the southeastern region was included.

Some consider the ruffed grouse the “king of game birds” because it’s a challenge to pursue, a thrill to witness on the wing and a delicious wild game entrée when served. These birds are native to Minnesota—the top ruffed grouse-producing state in the coterminous United States, with millions of acres of public land for hunters and their dogs to explore.

Drumming counts are an indicator of the ruffed grouse breeding population. However, the number of birds present during the fall hunting season also depends upon nesting success and chick survival during the spring and summer.

The number of birds present during the fall hunting season also depends upon nesting success and chick survival during the spring and summer.

Drumming is a low sound produced by males as they beat their wings rapidly and in increasing frequency to signal the location of their territory. Drumming displays also attract females that are ready to begin nesting. Ruffed grouse populations are surveyed by counting the number of male ruffed grouse heard drumming on established routes throughout the state’s forested regions.

“In a typical year we have 16 cooperating organizations providing folks to help us count grouse drumming,” Roy said. “We are grateful to our federal and tribal partners, some of whom conducted extra routes to get surveys completed during the pandemic.”
Biologists were not able to collect sharp-tailed grouse survey data this year during the pandemic.


RESULTS & DISCUSSION Ruffed GrouseObservers from 11 cooperating organizations surveyed 102 routes (80% of all routes) between 21 April and 13 May 2020, with 84% of northern routes completed and 42% of southern routes completed. Most routes (89%) were surveyed between 21 April and 10 May, with a median survey date of May 6, which is similar to last year (May 4) and the median survey date for the most recent 10 years (May 3). Observers reported Excellent (61%), Good (37%), and Fair (2%) survey conditions for 95 routes reporting conditions.

Statewide drum counts were similar to last year. I received 5 surveys from 2019 after the report was written last year, and updated results are included here. The southern survey regions tend to have lower average counts than the northern regions each year, and because southern regions were not surveyed in 2020, the statewide index is likely higher than it would be if southern routes were included. In the Northeast and Northwest, counts were similar to or down from last year, respectively. In the Central Hardwoods, observers surveyed only the northern portion of the region where counts tend to be higher, which likely explains the slightly higher, although not statistically different, dps in this region in 2020 compared to 2019. The most recent peak in the 10-year cycle occurred in 2017. Although peaks in the cycle occur on average approximately every 10 years, they vary from 8 to 11 years apart (Figure 3). Recent survey data indicate that ruffed grouse are in the declining phase of the 10-year cycle in Minnesota. 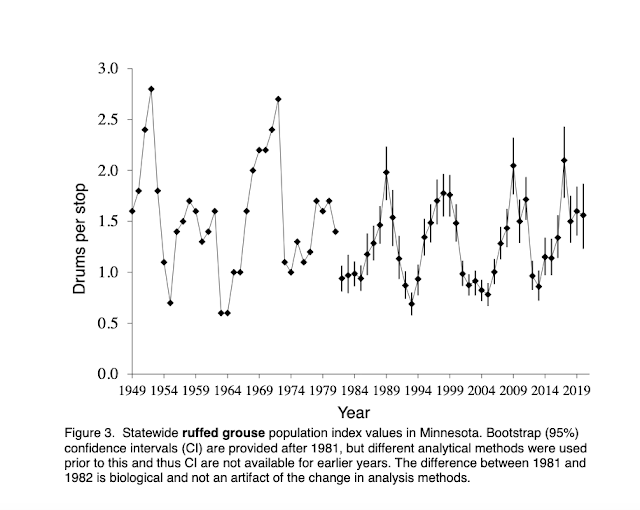 Read the original DNR Article
at August 11, 2020 No comments: