Spring Breeding Surveys Ruffed Grouse Drumming Survey Ruffed grouse drumming counts were conducted statewide from 105 survey routes during April and May 2014.
Significant weather conditions during the survey periods delayed couple route regionally
in 2014.
There was an average of 12.43 drums heard per routes statewide, a 16% increase from 2013 (10.77) average (Figure 8). Highest drumming counts were in Zone 1(Upper Peninsula; 14.86), following Zone 2 (Northern Lower Peninsula; 11.64) and Zone 3 (Southern Lower Peninsula; 4.14)
(Figure 7).
Woodcock Singing
-
ground Survey Results of Michigan Woodcock singing - ground survey were based on preliminary analysis of data from 95 survey routes (Cooper and Rau 2014). There was significant changes in the woodcock index for Michigan in 2013 and 2014 were detected. An average of 5.43 and 5.20 singing males were heard per route in 2013 and 2014, respectively.
The 2013 Central Region index, consisting of information from Illinois, Indiana, Manitoba, Michigan, Minnesota, Ohio, Ontario and Wisconsin, was significantly different from 2013 (n=408
, P<0.05). In the Central Region, there was an average of 2.70 and 2.57 singing males heard per route in 2013 and 2014, respectively (Cooper and Rau 2014).
Significant declines in the number of singing males were detected in Michigan and Central Region during 2014 - 2014. This is the first time in three years that the trend has shown a decline in the
Central Region (Cooper and Rau 2014). Michigan and the Central Region have experienced an average Long - term decline of 0.77% and 0.90% per year, respectively, since 1968 (P<0.05; Cooper
and Rau 2014).
Read the full Michigan DNR article
at September 20, 2014 No comments:

A grouse hunter walking a trail on state land near Aurora on Sunday shot a young wolf that had snapped at his yellow Labrador retriever, said Don Bozovsky, a conservation officer with the Minnesota Department of Natural Resources.

The hunter, who Bozovsky said wished not to be identified, was a young man. The hunter was walking a trail on state land at about 3:25 p.m. when the dog encountered the wolf on the trail, Bozovsky said. Fearing that the wolf would attack the dog, the hunter shot the wolf twice with a 12-gauge shotgun at a distance of about 8 feet, Bozovsky said.

Read the rest of the Duluth News Tribune article
at September 19, 2014 No comments:

By John Holyoke, BDN Staff
At a semi-secret site deep in the woods, wildlife biologist Kelsey Sullivan spent Wednesday evening helping to gather data he expects will eventually provide the first clear picture of the life, death and breeding habits of one of state’s iconic game birds, the ruffed grouse.
The Maine Department of Inland Fisheries and Wildlife has teamed up with the University of Maine on the study, thanks in part to a $190,000 federal grant and matching UMaine funding, in order to trap, tag and fit radio collars on grouse that will be released and followed for a year.
The study itself is scheduled to last three years, but more work may be pursued after that, according to the UMaine assistant professor who is leading the research.
“This is the first very large scale investigation of ruffed grouse populations in natural history in the state of Maine,” Erik Blomberg, UMaine assistant professor of wildlife ecology, said.
Blomberg, a scientist who was first introduced to grouse by his dad, an avid Wisconsin bird hunter, said there’s a pretty simple reason why grouse haven’t been the subject of more research in this state.
“In science, we tend to only study animals when they have problems, and [consequently,] ruffed grouse have not had much attention focused on them.”
That has changed dramatically over the past several months, as Blomberg, two graduate students and the DIF&W have teamed up.
Sullivan is the DIF&W’s game bird biologist. Among the first questions he’d like to answer: How are the birds living, reproducing and surviving?
To find the answers to those questions, Blomberg, Sullivan and field crew leader Brittany Currier needed some study birds. They’ve set up two sites as midcoast and northern study areas, and will actively trap birds at both until bird-hunting season opens in October.
The BDN isn’t sharing the exact locations of those sites at the request of researchers. Blomberg said it was important to keep those sites as secret as possible to prevent an unnatural increase in the number of hunters in those areas. Normal hunting pressure is fine, he said, but the research effort is designed to track what actually exists, rather than what might exist after a particular hunting area is publicized.
Read the rest of the Bangor Daily News article
at September 12, 2014 No comments:

Email ThisBlogThis!Share to TwitterShare to FacebookShare to Pinterest
Labels: ME

by Dave Smith
Ruffed grouse hunters in the Great Lakes region have learned over generations to pursue ruffs when they peak in their 9-to-11 year cycle, which last occurred between 2009 and 2011. Each year since has been marked by a predictable decline, but the results of this springˊs drumming surveys show an increase, statewide, in Minnesota and Michigan, and a slight increase in northern Wisconsin.
The M's
"This may indicate the beginning of an upswing in the grouse cycle, which has been in the declining phase since 2009," said Charlotte Roy, Minnesota Department of Natural Resources. Roy reported a 34 percent increase in the annual drumming surveys statewide, driven by the birdˊs prime range in northern Minnesota.
Michiganˊs drumming surveys revealed an increase from 10 to 12 drums per route, according to Al Stewart, Upland Game Bird Specialist for the Michigan Department of Natural Resources. Further, Stewart says that the heavy snow this winter and ideal moisture conditions this spring were perfect for over-winter survival and reproduction, thus he is cautiously optimistic for a slight increase in grouse numbers this fall.
Grouse populations in Maine have declined from the recent peak but are still near the long-term average, and this yearˊs hatch makes for a promising hunting season. "We had favorable weather for grouse nesting and hatch," said Kelsey Sullivan, Maine Department of Inland Fisheries and Wildlife. "Drumming surveys completed this spring revealed that areas with quality grouse habitat – such as much of northern Maine above Old Town – showed good activity, so I expect production will be relatively good."
See WI, NY, PA and the full Pointing Dog Journal article
at September 05, 2014 No comments:

In recognition of the passion with which these hunters pursue upland birds and to help make their time in Wisconsin's outdoors more productive and enjoyable, the Wisconsin DNR has developed the Fields and Forest Lands Inventory Gamebird Hunting Tool.


This tool allows hunters to quickly locate:
For instruction on how to use this great new tool please view this brief tutorial that highlights and shows how to use all these features.

See the original WI DNR Website
at September 04, 2014 No comments:

Email ThisBlogThis!Share to TwitterShare to FacebookShare to Pinterest
Labels: WI 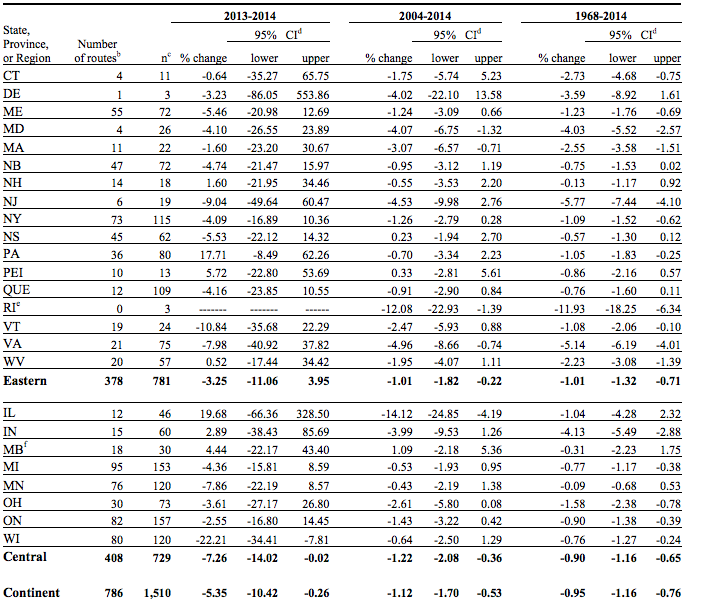