At their regular meeting on July 17, the Fish and Game Council unanimously voted to close the ruffed grouse hunting season statewide. Recognizing that grouse populations in the state were declining, the season length and daily bag limit were reduced, and the state was divided into two zones, in 2005, with the southern zone having a shorter season than the northern zone. The closure takes effect immediately.

Ruffed grouse populations in the state have declined due to lack of suitable habitat (young-aged forests) which they require. Such forests now comprise less than 1% of the state's forests. Anecdotal reports of hunters seeing grouse have dwindled as forests continue to age due to lack of forest management. Although hunting is not the cause of the decline, and in fact, the number of grouse hunters has a parallel declining trend, the Division and the Fish and Game Council feels that current grouse population levels cannot support a hunt at this time.

Email ThisBlogThis!Share to TwitterShare to FacebookShare to Pinterest
Labels: 2019, NJ

After many years of population declines, Missouri’s ruffed grouse finally may be seeing a turnaround. This past year, in a collaborative effort between the Quail and Upland Wildlife Federation (QUWF), of Buffalo, Missouri, and the Missouri Department of Conservation (MDC), 100 ruffed grouse were relocated from Wisconsin to Missouri’s Daniel Boone Conservation Area, in Warren County.

QUWF credits more than a decade of hard work, constant fundraising, generous sponsors, cooperative landowners and MDC personnel with the success of the effort. Craig Alderman, a research biologist and the founder and executive director of QUWF, cites in particular support from Ruger Firearms and personal interest from Bass Pro Shops founder Johnny Morris.

According to Alderman: “Our plan this year is to capture another 100 grouse and bring them down to Missouri and release them. We have a grouse coop right now of about 110 to 112 members that encompasses about 100,000 acres, and we’ve been doing extremely intensive timber-improvement work to prepare for a minimum of a 25-year plan for the grouse to stay, adapt and grow . . . . Between the chapters and the private landowners, I’d say we’ve seen an investment of well over $2 million in timber harvest and getting lands ready.”

Read the rest of the full Shooting Sportsman article
at July 10, 2019 No comments:

Email ThisBlogThis!Share to TwitterShare to FacebookShare to Pinterest
Labels: 2019, MO 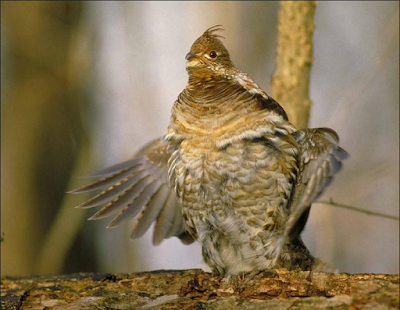 DNR biologists have monitored ruffed grouse populations for the past 70 years and this year, DNR staff and cooperators from 14 organizations surveyed 131 established routes across the state’s forested region.

Each year on the routes, surveyors count the number of grouse drums they hear. Drumming is the low sound male grouse make as they beat their wings rapidly and in increasing frequency to signal the location of their territory and attract females ready to begin nesting.

Drumming counts are an indicator of the ruffed grouse breeding population. Grouse populations tend to rise and fall on a 10-year cycle that can vary from 8 to 11 years, and Minnesota’s most recent population peak was in 2017. 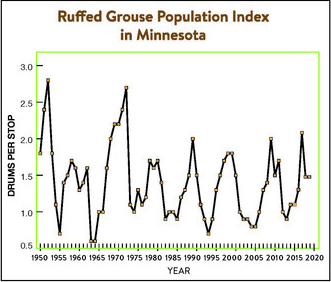