Even Blind Dogs Can Hunt 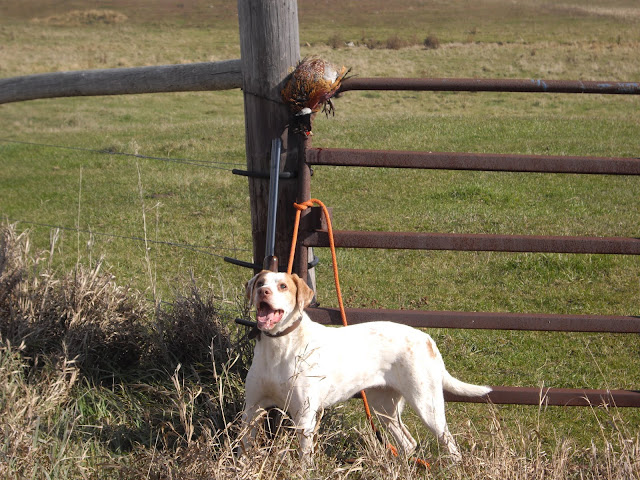 Saturday October 24th
Back down to Springfield MN and Farm 1480 on this brisk morning. As I drove through town the bank thermometers were saying 25 degrees. I unloaded Marge and Tina to start the hunt. I put on a full coat and heavier gloves and was hoping that would be warm enough. Our first rooster got up pretty soon, too soon actually. We were working the tailwind along a batch of willows and the bird burst out of the far side before I was really ready. I should have been able to make the shot as I had connected on a few similar one at the skeet range a few evenings before. I didn’t connect. We moved on. This unit has a lot of cover and a lot of birds. Sometimes the going is slow because there is so much scent. We made to the end of the field moving just one more hen, as we hit the end we moved south along the fence line and then west along another fence. I was expecting to see a bird or two along the fence as it has heavy cover and bordered a field of cut corn. About 1/4 of the way down the field a small draw goes from the cornfield to the upper parts of the CRP field we were hunting. Both sides of the draw have heavier cover and the dogs start to work the area. The dogs were showing a lot of interest in the are so I moved out a little ways to give them some room and to hopefully cut off any pheasant on the run. The dogs started moving quicker and then stopping quickly. After about three lockups they held and I moved in and started to kick the clumps of grass and nice sized rooster came up. Remembering that I was behind on the first bird I shot at I tried to lead this one a bit more and when I shot I could see that it was a wing shot and the bird was on the move as soon as it hit the ground. Fortunately Tina had seen him go down and was working the cover and finally got him after a few missed lunges.

After putting the bird in the game bag continued down the field. As we came over a small rise I could see a number of roosters and hens jumping from the grass into the standing corn that was at the end of the field. I was hoping a few lazy / inexperienced birds would be left in the grass. There were a few but unfortunately they were all hens. After crisscrossing the field a bit more I decided to give these two dogs and myself a break.

I changed into a dry shirt and switched to a vest instead of the jacket. I also changed out the Beretta 391 Ultra Light for a 16 gauge Browning Lightening Feather. The 16 ga runs about 6 lbs and is a joy to carry. I’ve also found that since I am hunting over pointing dogs that most of my shots are coming off of a point and flush that I don’t need to take a lot of longer shots and the 16 ga provides plenty of power. It was Fergie’s turn to hunt. She gets shortchanged as she is always the last one out for a hunt and sometimes we get our two bird limit before her turn comes. We went to a section of over that is about 50 yards wide is bordered by a gravel road on one side and a fence on the other. We had a nice head wind and she was working pretty well, as well as a blind 11+ yr old dog can hunt. We made it through the first area with just a wild hen being moved. Shortly after moving into the second are she started to work harder and get a lot more birdy. After two short soft points she was getting serious about it all so I started to kick around and a smaller rooster came up and I was able to drop it cleanly. She was so excited to hear the sound of the shot after her work and then to get to smell her harvest topped it all off.

It was a day that I hope for whenever I head out. Great dog work and no lost birds.

Hunt Private Land In MN And Ten Other States
at October 27, 2009 No comments:

First Duck In A Decade 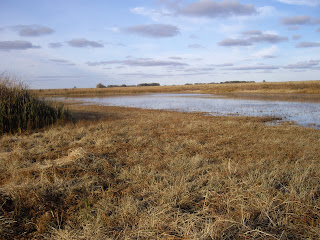 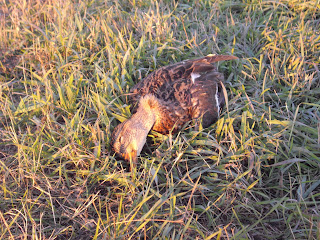 Saturday, October 17 started out with high hopes. I could tell it would be a sunny day out since I could see the stars in the early morning sky as I loaded the dogs into the truck. I left St. Paul on the way for a farm about 30 minutes west of Albert Lea. Sure enough as the sun came up I could see blue skies. When I hit Owatonna I could see clouds to the south and sure enough as I hit Albert Lea it started to rain. I got off the freeway and headed back north to Owatonna and another farm I had lined up.

As we got to the farm I could see that the corn was still up and the beans were still in. We tried working the edges of the crops and cover. After about 30 minutes Marge’s beeper went into beep mode. I struggled to get through the thick cover.. I couldn’t through quick enough and I heard the rooster cackle out the other side. We continued to work this farm for another hour and didn’t get any other bird action. We moved to a small 40 acre patch of crp another 15 minutes south. This parcel looks really good but I have yet to see a bird there. I keep trying it because it looks so nice. We didn’t see anything again. Off to the first planned farm. This area is west of Albert Lea and consists of two 40 acre units across a dirt road from each other. I started with the south portion as we’ve seen birds there on a regular basis. The beans were still in along 3 sides of it and the corn was up across the road. There is a U shaped area of heavy brush with cattails in the center and thinner crp cover on the outside. The dogs were working the inside of the U and I was walking the outside I saw a couple of hens get up a little ways out and then a rooster. I took a shot, longer than I usually take, and the bird kept going. We worked the rest of the way around the U and put up 4 more hens, a doe, and a nice buck. I switched guns to a waterfowl legal one and grabbed some steel shot and went across the road to the other parcel. In years where there is good rain this parcel has a small pond at the back of it and since we’ve had a lot of rain this fall I thought I’d take a look. We made out way to the back of the unit and I got down low as we approached the edge of the pond. There was quite a bit of heavy cover so I was able to get right to the edge before I stood up. The ducks saw me and took off. I got off a shot at one and was able to drop it. Tina decided she didn't want to go into the water to retrieve it so I went sloshing though the shallow end and got the duck and was happy to have worn Goretex. It is the first duck I’ve gotten in over a decade. I haven’t tried for any in that time but it was fun to get one.

We reworked both the sections in hopes of being able to make it a multi-species day but to no avail. We did put up another rooster but he got up and out through some thick stuff and I chose not to make the shot. It was a fun day but a lot of driving. Almost 300 miles of driving by the time we made it back home. 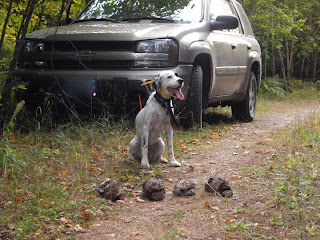 This past weekend I was able to go up to Ely MN to grouse hunt. I've been going up there for the 2nd weekend of grouse hunting for the past 10 years.

One of the challenges is that we've been hunting the same areas for 10 years now. The spots that were hot 10 years ago are now about 10 years past peak.

On Friday we got out at about 1:30 and it was 70 degrees, sunny, and not much of a breeze. We hit our usual spot. I ended up seeing/hearing 6 birds - shot at 3 and ended up missing all three shots. The cover was thick and I didn't really feel like any of the shots were that doable but I've made tougher. We ended up quiting at about six as the dogs were hot and tired.

Saturday we got out at about 11 am. Cooler at 60 degrees but more humid as the weather was changing. We went back to the old reliable spot one more time. Saw 3 more, shot and missed one more time. As we were pulling out 2 1/2 hours later we saw two separate trucks pulling.

I decided to drive down the main road a little bit further. I ended up seeing a nice looking fire road and decided to try it out. I unloaded Tina, my seven year old English Setter, and started to walk. After walking about 100 yards I could hear a chainsaw just up the trail. We went back loaded up and drove up to the chainsaw area. I stopped and spoke with the two guys cutting wood and they said the trail went a bit farther up and that they had seen some grouse now and then. Drove another 100 yards parked and unloaded Tina again. We went a little ways and got a nice point and proceeded to miss another shot. Five more minutes of walking and another point. Finally I connected. 10 minutes another connection and a miss. We worked out way back to the truck and took turns working Marge and Fergie. Marge had a nice point on a ridge but the bird went straight out in front of her so I didn't get a shot off.

Took a bit of a break for a Snickers and a Dew. Unloaded Tina again and decided to rework the original portion of the trail that we had gotten our birds on. We got another point after a short while and I was able to connect on a double so I felt pretty good about myself. I ended up taking 4 out of the last 5 birds that I shot at. We didn't see any more birds and called it a day at about 6:30.

I think we saw/heard about 16 birds on Saturday between the two spots. I think the numbers are up from last year but not to the crazy numbers that I'd seen 8-10 years ago.
at October 01, 2009 No comments: