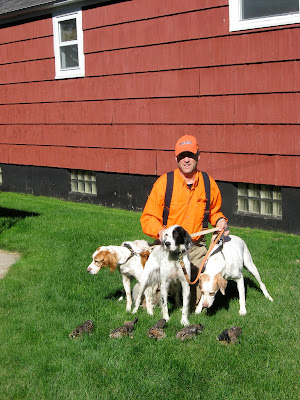 Sept 18 MN Grouse Opener - Ely MN
Normally I don’t hunt the opening of grouse hunting as the cover is too thick and usually it is too warm but this year it looked like it was going to be a nice cool weekend so I decided to give it a try and head north to Ely.
Saturday started out nice and cool and the leaves seemed to be down more than usual for mid-sept.  As I was pulling into my first spot a pickup was already pulling out.  They said they had seen a couple of batches of up to 6 grouse still bunched up.  Tina ( English Setter ) and I started down the trail to some lower areas that we’ve had good luck with in the past and sure enough it didn’t take Tina long to get birdy.  Within a short period she had two nice points but the birds did their usual flush behind the trees maneuvers and I wasn’t able to get off a shot.  After working the area for a good period of time we started to head back to the truck and not more than 50 yards from it did Tina lock up solid.  The bird flushed towards an open area and I was able to connect with it.  When I picked it up I was amazed at how small it was.  I put Tina in the truck and we started to drive to the next spot and along the side of the trail I saw another bird.  I threw  the truck into reverse and backed up far enough to get Marge out and give her a chance at it.  Marge made a nice point and I got lucky with another nice flush and we had two in the bag.
Marge and I continued into the back portion of this area and while walking down the trail  as we rounded a corner she locked on point and another easy shot and another young bird was in the game bag.  I was quickly becoming a fan of opening weekend.  We worked this area for another half an hour and had a missed shot and a wild flush.  It was time to move to area number two.
Area number two is just a couple of miles away but I had never hunted it before last year but I had good enough luck to make it worth revisiting.  It was a good choice.  We saw a number of birds and I missed a couple of easy shots but ended up connecting on the last two that it took to fill out our limit.  The last bird was a far out crossing shot which I was happy to successfully complete as I have been missing those shots at the gun range all summer long.
We were able to finish up our hunt by about 1 o’clock.  We then drove along looking for some new coverts.  We didn’t find any useable sites but will continue to look as you can never have too many good spots and the new one that we found last fall worked out well for us on this trip.
at October 04, 2010