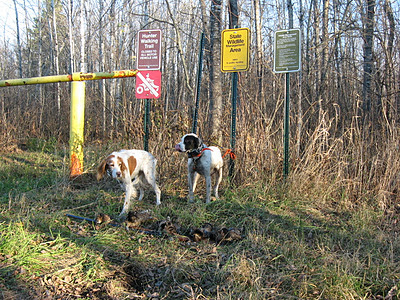 Thursday 10 / 20 / 11
45 degs and Sunny.
I am lucky enough to have a job where I can occasionally skip out for an afternoon and make up my time in the evening.  I decided that today was one of those days as it was cool and sunny.  It has been gray and windy the past few days and I’ve had good luck a few times when I was able to hunt the first sunny day after a few crappy days.
Tina and I started out at a small area that we have seen birds at each time that we have hunted it this year.  We have never gotten a bird here though.  In fact the last time we hunted this spot, three of us moved 4 birds and didn’t put one in the bag.
When we pulled in I could tell that the area had been hit fairly hard in the days since we had last hunted it.  The grass on the trail was much more beat down by people driving in.  We worked the trail out and bushwhacked through the clearcut on the way back and didn’t move a bird.
Off to the second area.  I marked this area “ Don’t Hunt “ as it is mostly older growth and we have only seen one bird there.  I decided to give it a shot again though as it was on the way to the third area and the trails were easy walking for 15 yr old Marge.  After about going 100 yards down the trail she locked up solid.  I started to look around and just as I looked to the right into some saplings the grouse came up and with the shot the grouse came down.  I’m always excited when one of the dogs has a nice point that produces a bird but I am even more so when one of the old timers can have it happen.  We worked the trail for another 40 minutes but didn’t move another bird.  After putting Marge back into her travel kennel I got out Fergie and we went for a stroll.  Even though she is totally blind she still loves to get out and smell the air.  We did a short walk and then returned to the truck.
Our next spot was a MN Hunter Walking Trail.  These trails are well publicized  by the state so they aren’t any big secret but this one has decent habitat diversity and we have seen birds here before.  The hunt started well with Tina going on point less than 100 yards from the truck and and easy straight away shot put the bird into the bag.  The next bird was luckier as Tina had a good point on a corner and it broke down the side of the trail that I hadn’t gotten to yet and I didn’t even get off a shot.
We had started to hunt an area of the trail system that I hadn’t been able to cover yet and I could hear Tina working off to the side in an area of thick pine trees.  I was starting to get a bit impatient as she didn’t really seem to be working the type of cover that had been producing birds when her beeper collar indicated that she was on point.  I made my way into the pine trees but couldn’t see where she was when I heard a flush and saw just a flicker of the bird.  I still couldn’t see or hear Tina when I heard a second flush and was able to get off a snap shot.  I couldn’t see if I had hit the bird or not but I heard a thud letting me know that I had connected.  A third bird flushed but I passed on the shot as I wanted to make sure I had correctly marked down the bird.  As I made my way to the bird I could see Tina holding her point downwind of where the birds had flushed.

As we made our way back to the truck another wild flush from the opposite side of the trail that Tina was working caught me by surprise and I wasn’t able to get off a shot.  I was feeling pretty good about getting three birds already and was daydreaming a bit...
About 25 yards from the truck is an area where two of the trails come together and create a choke point and Tina started to get really birdy but I figured “ how could there be any this close to the truck “.  I was about to find out as she locked on point and I moved up the trail to cut them off by the edge of the trail intersection.  A flush and a hurried shot saw the bird fly off unharmed but the shot sent another bird up and this one wasn’t as lucky and became bird number four in the bag.
There was still and good 90 minutes of daylight left and Tina was still showing good energy so I decided to take a look at the other trail that starts at the parking area.  It started out by going through an area of younger growth but soon changed to older cover.  The trail split and we took the fork to the right after a short time it hit and area of blow down and Tina started to get birdy again.  She was a decent distance through the blowdown and off to my left when the beeper signaled point.  I wasn’t too excited about making my way through all of the logs to get to where she was but she had been pretty good with her points as of late so I thought it would be worth it.  As I started to approach her I was off her right side and could see that the cover was much thinner past where she was pointing.  As I passed her I could see that it was actually the other fork of the trail and as I stepped onto the trail a bird got up from in front of her and I again missed and again I was lucky enough to have a second bird get up and even luckier when I was able to connect and drop it just a little distance up the trail to make for an easy retrieve for Tina.
All five of our birds came from public land and four out of the five came from a well marked Hunter Walking Trail in the Grand Rapids, Mn area.
The Garmin Astro said that Tina covered 7.9 miles in 2 hrs and 17 minutes
at November 26, 2011